Editor’s Note: Last month we published an article by David Zwang on Landa’s first S10P duplex press beta site, Mercury Printing in Rochester, N.Y titled “Landa: And They’re Off!” With the buzz building around the S10, we thought it would be informative to look back to David’s earlier articles on the development of the S10 and the many components and partnerships that have made it possible – albeit a bit later than everyone hoped back in 2012.

At drupa 2012, Benny Landa introduced a new inkjet printing technology to excited crowds with great fanfare. Now five years later, the first Landa Press is installed and there are two more right behind it, as well as a waiting list. David Zwang was one of about 100 people, mostly potential customers, from around the globe to visit with Landa at his facilities in Rehovot, Israel, to get a closer look at the man, his vision, and the machines.

It was more than five years ago that Benny Landa excited the crowds at drupa 2012 with his latest venture, Landa Digital Printing, a company focused on a new printing technology called Nanography. Since drupa 2012, there have been many rumors and stories about the Landa press and ‘if’ or ‘when’ it would ever be delivered. Since that initial introduction in 2012, I have monitored its progress and taken a close look at the unique printing technology, which has some obvious roots in one of Landa’s earlier companies.

For those of you who are not familiar with Benny Landa, he launched Indigo in 1977, unveiled the world’s first digital press in 1993 and subsequently sold the company to HP in 2002. After selling Indigo to HP, Benny changed his focus to research in nanotechnology and how capturing energy from heat might be used to create low cost electricity. As a result of some of his research, he has developed many other technologies. One of those was Nano-Metallography, which was designed for metallized print embellishment producing zero waste at less than half the cost of using foil. Landa has since sold this technology to the Altana Group, along with a minority share of Landa Digital Printing. Other developments include one for more efficient drug delivery, another sold to L’Oreal for safe and more permanent hair coloring, a pigment technology partnership with BASF for automotive paint, a soon-to-be-released technology for more efficient solar panels, and a business that grows diamonds, just to name a few. He has also created a philanthropic fund for identifying and educating poverty-ridden children of all religions and races in Israel. To say he has been busy is clearly an understatement.

With his background in print technologies and processes, Landa realized he could also design a printing process using nanotechnology. This led to the development of a digital printing process and a press using Nanography that could ultimately replace offset printing with equal or better quality and efficiency, meeting the cost bar set by offset for longer runs.

Landa uses the Fujifilm Dimatix Samba printheads which produce a native 1200 dpi resolution. The offset inkjet technology is unique, and produces a very vibrant print output. The output I saw included beer beverage containers as well as a wide assortment of other folding carton print which was as visually impressive as any offset print I have seen. The Landa sheetfed presses currently support up to 7 colors (CMYK+OGB), while the web presses support up to 8 colors (CMYK+OGB+White). The ink is delivered from an ink farm, using ink that is delivered in concentrated form to minimize shipping size and cost. The computer-controlled ink system mixes the concentrate with water for delivery to the press while also monitoring levels and automating reordering. 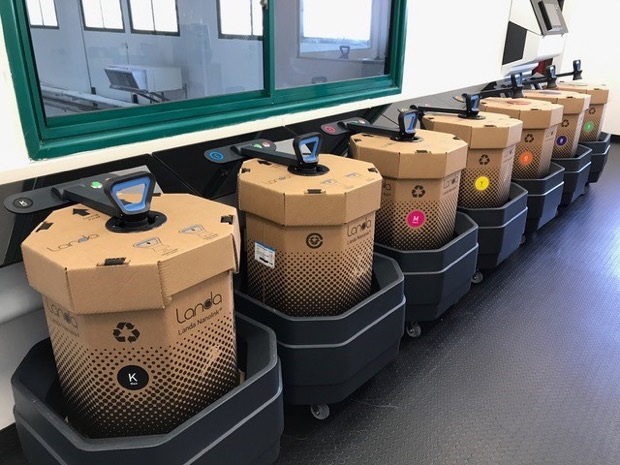 Once fully implemented, the Landa Active Quality Management system will be an inline closed-loop quality control system with automatic image inspection, registration and nozzle failure correction. Registration detection uses side marks; while defects, color and nozzle outs use a full sheet scan. There will also be a feature that allows more in-depth quality checks of specific areas on the sheet.

It is a fairly complex implementation that integrates technology from AVT, Landa, Dimatix and EFI. The AQM system is currently installed on one machine in R&D and will be installed in all future shipping machines (including the betas), as well as the already installed beta machine at Graphica Bezalel in Israel. It currently works with a printed master, with support for a digital master to come. The importance and implementation of this AQM technology cannot be overstated. However, even without the AQM working, I was somewhat amazed at the vibrancy of the print coming off the press AND being sold in this first beta installation. It is offset quality, with the exception of some minor registration and nozzle out artifacts, which should be addressed with the AQM system.

The first of these new presses to be released, the S10, is a simplex B1 sheetfed press designed for folding carton printing. The media transport for Landa presses was jointly designed by Landa and Komori, and it is manufactured by Komori and shipped to Landa for assembling with the imaging technology. 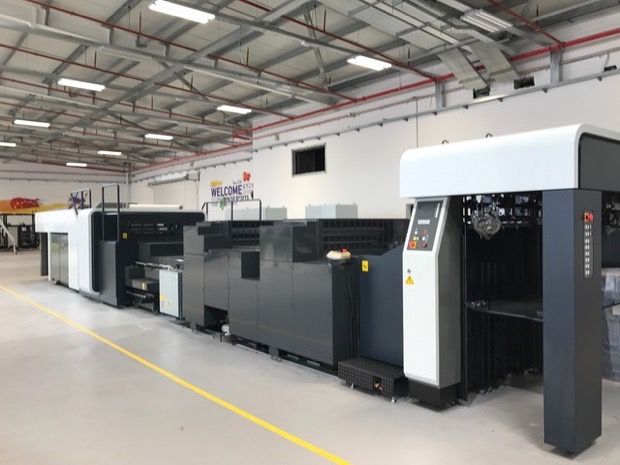 Transport Only from Komori

There are three press models in the current lineup. The two sheetfed models include the simplex S10, which is designed for folding cartons, POP applications, etc.; the duplex S10P, which is a perfecting model designed for general commercial print applications; and the continuous feed W10, a web-fed model designed for flexible packaging, etc. The sheetfed press is rated at 6,500 sheets per hour (sph), with the option of increasing that to 13,000 sph with a high speed option in the future. There is also an optional coating unit that supports both UV and aqueous coatings. The W10 prints at 320 fpm, and up to 656 fpm in the future with the high speed option. The imaging technology of the presses supports a very wide range of media.

The attendees at the event, invited from all over the globe, were mostly folding carton printers, with a few book and sign & display providers as well. I had an opportunity to speak with many of them about their feelings about the technology, its current status, and their readiness to purchase and install. While the reactions were mixed, there was an overwhelming feeling that after seeing the press sitting on the floor at a folding carton converter and the quality of the output, for many, it was not a question of ‘if’ but ‘when’ they would jump in. Eyal Harpak, one of the partners of Graphica Bezalle, the first beta installation, stated that one of his customers actually came to their facility, looked at the output, and indicated they were glad to be his customer. Eyal, in turn, said he“was proud to be a Landa customer.”

The thought behind the Landa experience goes beyond just the printing technology. They are using the latest technologies to create a total experience. This includes virtual reality training and an augmented reality system with 3D glasses with instructions on part changes and repairs for self-repair. Landa has also been working with a logistics company, to be named later, on a 3-hour parts delivery service for critical parts, and automated consumable replenishment. As is the case with many press manufacturers, there is a pre-installation site survey, but they also perform a workflow audit and assign a field service engineer on site for ramp up. The final press is a great example of the partnership among Landa, Komori and EFI; however, in an effort to maintain a high quality customer experience, there is only one number to call if a customer has a question or problem, and that is Landa. To minimize and expedite the need for repairs, the press includes IOT tracking of indicators to help anticipate and fix any issues that might arise, along with remote virtual troubleshooting.

The cost of operation includes the initial capital purchase, a monthly maintenance fee which includes the transfer blanket and other parts (similar to the HP Indigo arrangement), and a Pay Per Usage (PPU) which takes into account the ink coverage on a sheet in place of a standard ‘click charge’. Some of the printers, who have never had a digital press of any kind before, are still trying to figure out what that would mean in the real cost of print; however, others were comfortable with the pricing models, understanding that they need to have enough work to produce at least a million impressions per month. The three beta sites, when asked about their feeling about the cross-over point with offset, said that they believe that is somewhere around 5000 sheets and perhaps a bit higher. The numbers will undoubtedly firm up once there is some operational history to look back on.

The two other beta sites include Imagine! Print Solutions in Minnesota in the US, to support its visual display business. They are expecting their press will be delivered in November, and should be operational in the first quarter of 2018. The third beta is Edelmann, located in Heidenheim, Germany, which is one of the largest beauty and healthcare packaging companies in the world. Delivery seems to be on track, since the two other beta presses were already in various stages of assembly in the plant.

The excitement at the event was palpable, with the “lucky” three beta sites thrilled about the prospect of learning what they can do with the new presses. While each of them seem to have different business requirements, they have already shared the purchase with their top customers who also seem to be excited at the possibilities it will offer. Two of the most interesting comments were, “enables us to do more of same and more of different,” and they all “enjoy Landa as a partner and not a supplier”. David Zwang travels around the globe helping companies increase their productivity, margins and market reach. He specializes in production optimization, strategic business planning, market analysis, and related services to companies in the vertical media communications market. Clients have included printers, manufacturers, retailers, publishers, premedia and US Government agencies. He can be reached at [email protected].

David Zwang travels around the globe helping companies increase their productivity, margins and market reach. With over 40 years of industry experience, David specializes in process analysis, and strategic development of firms in the fields of publishing, packaging, design, premedia, and printing across the globe.