The Jeti Tauro H3300 UHS LED is Agfa’s new flagship, targeted to the high end of the sign & display market. This UV LED inkjet engine prints media up to 3.3 m wide in four or six colors at a speed up to 600 m²/h. Like its siblings, it combines industry-leading print quality with all-round versatility, extreme productivity and cutting-edge automation, yet it is even sturdier and up to 30% faster. And just like the other members of the award-winning Jeti Tauro H3300 family, it is a true hybrid that can handle boards and sheets as well as flexible materials – in different configurations.

Thanks to the extended vacuum zones and media guides, it is also well-suited for corrugated cardboard packaging printing, thus enabling sign & display printers to expand their offering and cover all deliverables for their customers’ marketing campaigns.

The master roll-to-roll configuration can handle both single- and dual-roll printing, and features an optional camera for accurate double-sided printing of block-out media.

“The Jeti Tauro was already a synonym for highly productive hybrid printing with advanced automation, yet with the Jeti Tauro H3300 UHS LED, we have raised the bar even more,” says Reinhilde Alaert, Product Manager Sign & Display at Agfa. “When developing this new flagship, we went all out to make it fit for extreme workloads. On top of that, it is a versatile all-in-one machine that can print rigids and sheets as well as roll materials at the highest quality and the lowest ink consumption. It is the epitome of our ‘Extreme Productivity. Extreme Quality.’ motto.”

On March 9th, Agfa organizes a virtual event dedicated to the new Jeti Tauro H3300 UHS LED under the heading “Meet the beast”. Presentations covering market trends, as well as the new printer’s features and benefits, will be alternated with expert talks about applications and advanced workflow and color management.

To sign up for the launch event, visit http://studio5d10.com/.

Sustainable inks with the lowest consumption

The Jeti Tauro H3300 UHS LED uses Agfa’s GREENGUARD Gold certified Anuvia UV LED inks, characterized by a wide color gamut and high color vibrancy. Ink consumption is the lowest on the market thanks to Agfa’s patented ‘Thin Ink Layer’ technology – which relies on the exceptional color strength of the pigments in Agfa’s inks, the smart algorithms in the Asanti software, and perfectly matched printer components. White ink and primer are optional.

The Jeti Tauro H3300 UHS LED is powered by Agfa’s Asanti workflow software, which controls and automates the entire printing process from prepress to finishing, while guaranteeing color consistency and optimizing ink consumption. The smart Asanti Production Dashboard displays ink and media consumption and printing time for each job and printer. Calibrated Print Modes (CPMs) are personalized production templates that control all parameters for a particular substrate and enable automatic job creation.

Agfa introduced the first Jeti Tauro H3300 in the spring of 2018. These high-end hybrid large-format inkjet engines have since helped print service providers around the world to make their business more efficient and to acquire new business. The Jeti Tauro H3300 range now includes:

All Jeti Tauro H3300 LED printers can be used in different configurations for boards, sheet and roll-to-roll printing. 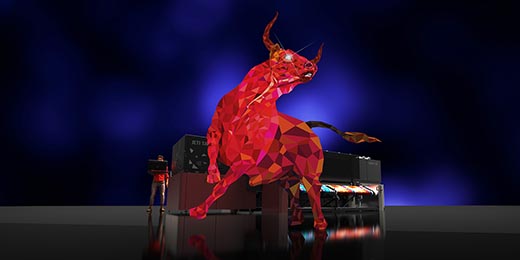